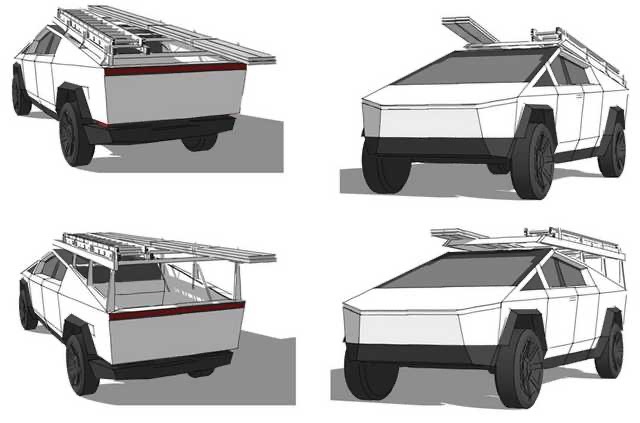 Tesla Cybertruck was announced back in November 2019, and it is estimated that as many as 500,000 pre-orders were made not long after the announcement. But what was not announced was the specific options that might be available for order when the final specs come out.

But that doesn’t stop Tesla superfans to speculate on possible Tesla Cybertruck options. From solar panels for extra range, to now a possible ladder rack for heavy duty workers.

In fact, back in November during the Tesla Cybertruck event, we can see Elon Musk pointing to one of the images that shows a semi-blurry image of the cybertruck with a ladder rack. Not much was mentioned about that ladder rack feature at the announcement event, but there is certainly something that resembles a ladder in the back of that truck.

tesla Cyberruck pickup can adjust the height of the tail according to the needs of the loaded items using air suspension, which helps loading and unloading tools and large-sized items.

Besides loading large and heavy items, tesla might include an option for construction workers to add a rack. We can see from the image a ladder on top of the cargo compartment. It is likely to be a detachable design, which can be taken down for use when it is needed.

Cybertruck has a payload capacity of up to 3,500 pounds and an adjustable air suspension . It also has a 100 cubic foot cargo compartment that can easily fit an ATV.

The adjustable air suspension can be raised and lowered by 4 inches to facilitate the use of the cargo compartment. At the same time, the auto-leveling function can adapt to any occasion and provide help for each job.