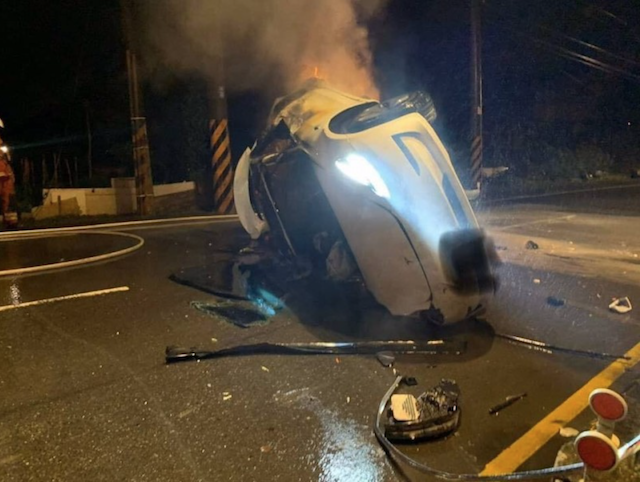 The 32-year-old, Tang, was driving a Tesla Model 3 that was suspected of speeding and crashed into the central separation island. The vehicle caught fire on the spot, and unfortunately the drive had no time to escape the burning car. Once police arrived at the scene it was too late, the driver was pronounced dead at the scene.

Surveillance video below shows the car hitting the median, flipping the car and immediately catching fire.

The fire department reported that they received a crash alert at 12:30am on April 1st, 2020. They found a tesla rolled over the roadside and burning with bursts of white smoke. The fire station dispatched the fourth brigade Longtan team to the scene to rescue. When the window was broken, they found the driver lying on the driver’s seat and badly burnt.

The firefighter explained: “When I arrived at the scene on April 1st, I found that a tesla model 3 was on fire. At that time, the car turned over, caught fire, and there were still people trapped in the car. Therefore, I immediately requested backup support from a second fire truck and while to contain the fire with large amount of water.”

Firefighters said that when the second flight arrived at the scene, the fire was already showing signs of stabilization, but there was still a residual fire on the lithium battery of the chassis. “While continuing to shoot water, the detachment and the school principal jointly executed the vehicle stabilization and power off procedures. There was a significant impact damage to the car and the fire, so the power-off procedure was performed by the front hood, and the 12V power-off was performed after the high-voltage orange line was completed. “