Gaming is predicted to be one of the biggest potential markets for dApps, just as mobile gaming on Apple and Android phones has grown into one of the most lucrative markets for app developers. Some of the key features that distinguish dApps from ‘traditional’ mobile games is allowing users to assert ownership over assets and trade them with other users for cryptocurrency.

A wide range of dApp games are in development for EOS. While some are already active, many on this list are still in various stages of development or beta release. The low transaction volume and number of users for some of these titles should therefore be noted with caution, as many have yet to receive a full release. Another point to note is that while most of these games’ websites offer English language support, a majority are in Chinese by default – an indication of how dominant Far East Asian countries are in the cryptocurrency and blockchain space.

dApp gaming is an emerging field that has enormous potential. The 10 titles on this list show what direction this emergent industry is heading in.

EOS Knights was the first mobile game deployed on the EOS blockchain. It also consistently ranks as by far the most popular. In EOS Knights, players choose from several classes of hero which are then used to fight off goblin attacks on a village. As they play, users receive materials which can be used to upgrade their character or sold for EOS on the game’s marketplace.

Creator Myeongjin Shin describes EOS Knights in as being inspired by RPG games such as Diablo 2 and Monster Hunter, with the blockchain-powered marketplace being ideally suited for exchanging the items players unlock and craft in such games.

Described as the first player vs player trading card game on EOS, EOSDOTA draws inspiration from the popular Defense of the Ancients (DOTA) mod for World of Warcraft III that later inspired Valve’s Dota 2 title. EOSDOTA has no direct link to the teams that create previous Dota titles, but as the concept’s origins lie with a community-created mod, the intellectual property is freely usable.

In EOSDOTA, players collect cards and build decks which can then be used to battle against other players. An interesting aside here is that Valve released an official card game based on Dota 2 and the Magic the Gathering trading card game. The infamous Mt.Gox Bitcoin exchange was so named because it originally started out as an exchange for Magic the Gathering cards. Things have now come full circle in a way, with the blockchain tech that Bitcoin pioneered making it possible to securely store and exchange valuable cards on EOS.

The Ethereum-based Crypto Kitties was the first gaming dApp to achieve widespread recognition, with its popularity in late 2017 causing massive network congestion. XPET similarly allows players to collect and upgrade their own digital pets, though the concept adds extra layers of complexity, adding controllable territories and buildings to the in-game ecosystem.

The most expensive Crypto Kitty exchanged hands for $100,000 worth of ETH during the game’s peak popularity in December 2017. XPET characters haven’t received such wild valuations, but facilitating the ownership and exchange of unique in-game assets such as these is arguably blockchain gaming’s greatest innovation.

The concept behind CryptoThrone is similar to that of successful mobile game Clash of Clans. In CryptoThrone, players work together to build fortresses and attack others, plundering and defending resources that can be exchanged for EOS.

Clash of Clans is one of the most successful mobile games of all time, with figures from October 2018 revealing it had been downloaded more than 600 million times and was generating upward of $1 million per day from in-game purchases and advertising. Developers Supercell have made more than $6 billion from Clash of Clans, though players have no direct way of monetizing their activity within the game. By adding the ability to exchange items earned in game for EOS, games like CryptoThrone have a lot of potential to win over players from other mobile games.

Solitaire Duel is advertised as the first game of skill on the EOS blockchain. Players go head-to-head in virtual card games with the ability to stake tokens on each game’s outcome.

While the transaction volume is small compared to the huge sums generated by mobile games, Solitaire Duel is one of the highest revenue-generating games created on EOS. By focusing solely on two-player battles, Solitaire Duel doesn’t need a huge userbase in place to be effective. It’s early success suggests there is a lot of potential for skill-based blockchain games that allow players to bet directly against each other.

As with EOS Knights, EOSDOTA, and XPETS, Unlimited Tower allows players to collect characters with varying degrees of skill and rarity. Unlimited Tower players assemble a team of ten characters which are then used to clear various in-game stages and attempt to attack or defend a tower. Towers held by a player generate EOS dividends.

Unlimited Tower is described as a Strategy Roleplaying Game (SRPG). Incentivizing players to earn EOS rewards through successfully completing in-game challenges is another powerful way in which blockchain games can differentiate themselves from existing mobile games. 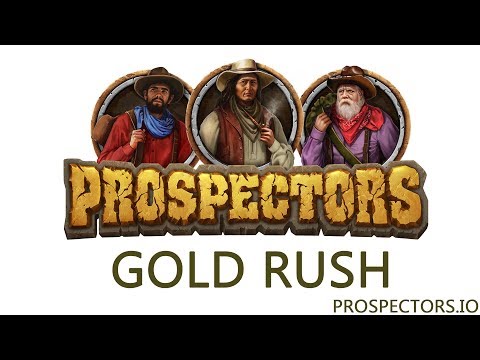 Prospectors is EOS’s first massive multiplayer real time strategy game (MMORTS) centered on an in-game economy. Prospectors is based on the 19th Century California Gold Rush, which seems an appropriate setting given the parallels often drawn between that get-rich-quick frenzy and the wild price swings within the cryptocurrency market.

Each player controls three workers and can them team up together with other players to form larger mining operations. As with numerous other titles on this list, items collected in game can be traded with other players for EOS. The beta version of Prospectors isn’t released until the end of June, with major upgrades then scheduled on the roadmap for September. Games driven by massively interactive in-game economies such as EVE Online have been big hits in the past and it seems like a model which is ideally suited for blockchain.

Three Kingdoms is another title which has yet to officially launch at the time of writing, though with a May 17 launch date scheduled in its road map, Version 1.0 is likely to be active by the time you read this. Staggered updates are scheduled over the following months, including adding features such as 1v1 PvP battles in June.

In Three Kingdoms, players can collect materials which are then forged into weaponry for use in its PvP battles. These materials can then be exchanged with other players using its in-game EOS-powered token. There does some to be some confusion on major dApp listing sites as to the exact title of the game, as EOS Dynasty and Three Kingdoms are listed as separate titles, though both are linked to the same website.

Described as an “easy” and “intuitive” 1v1 PvP game, EOS Tower Game is one of the most straight-forward games on this list but it is also one that you can instantly try out for free at their website without even connecting an EOS wallet. The practice version of EOS Tower was released in February, with players able to earn PVP tokens which can later be staked in the competitive PvP version of the game.

The game mechanics are as simple as advertised: players control a giant crane which swings back and forth across the screen and they must click to release a block. These blocks pile up on top of each other to form a tower. Whoever stacks the most blocks within 40 seconds win, but miss one time too many and the game is over. There are countless examples of deceptively difficult “pick-up and play” games which have enjoyed huge success over the years, from Tetris to Flappy Bird. Adding the ability to wager tokens and compete with other players adds a new dynamic to a proven formula.

EOSJOY Snakes is a blockchain-based take on the classic Snake mobile game that will be familiar to anyone who can remember a life before smartphones. Unlike the classic version you might have played on a Nokia 3210, this colorful modern take on the format allows players to collects colored gems which represent either EOS or the game’s native token. And also unlike the original, this version allows multiplayer gaming where players can ‘assassinate’ each other’s snakes and steal their collected tokens. A portion of the game’s revenue will be distributed to players based upon the quantity of gems they’re able to collect.

While the game has an option to switch to English, this didn’t appear to work when we tried it out. But if nothing else, EOSJOY Snakes shows that no mobile game is beyond the scope of a blockchain-driven update.

Are dApps the future of mobile gaming?

None of these games has yet amassed a major userbase, but there is clearly a lot of potential and innovation in the rapidly-growing field of dApp game development. While microtransactions on mobile games have generated huge sums for successful developers, many gamers have grown tired of the “pay to win” format. By allowing users to sell assets captured in-game for cryptocurrency, dApp games have a good shot at turning the economic model of most mobile games on its head.